“Post-war Beirut Urban Development and the Practices of Urban Planning?”

The lecture is part of the “Experiential Urbanity” Workshops Cycle 2010–2011 organized by the Urban Planning Institute and the Department of Architecture & Interior Design at LAU, and will be given by Professor Scott Bollens.

Experiential Urbanity Workshops Cycle 2010–2011
Experiential Urbanity is stimulated and shared through the participation of a pluralistic global community that encompasses a broad spectrum of research by scientists, planners, architects, political scientists and other scholars with original views on urban development.

Experiential Urbanity seeks to evaluate the current urban conditions, draws upon the confusion and declares the various problematic issues which derive mainly from the lack of a proper socio-physical frame that regulates the distribution, movement and spatial perception of people within and beyond the city.

Presenter
Scott Bollens studies ethnicity and urban policy, development strategies, and regional and intergovernmental approaches to planning. Over the past 17 years, Professor Bollens has interviewed over 220 urban professionals and community advocates in Jerusalem, Belfast, Johannesburg, Nicosia (Cyprus), Sarajevo and Mostar (Bosnia), and Barcelona and Basque cities (Spain) about the role of urban policy and city building amidst nationalistic ethnic conflict and political transitions.

His recent books include Cities, Nationalism, and Democratization (2007, Routledge), On Narrow Ground (2000, State University of New York Press) and Urban Peace-Building in Divided Societies (1999, Westview Press). Prof. Bollens’ current book project is City and Soul in Divided Societies (under contract with Routledge Press). This book will focus on the historical, theoretical, and practical issues of urban divisions, but will also uniquely provide a first-person account of conducting interview-based ethnography in these places of ethnic and nationalist polarization.

In Beirut, Professor Bollens is studying two main questions: (1) how has urban policy and urban governance in Beirut influenced sectarian (inter-confessional) relations since the civil war? and (2) how have sectarian relations influenced post-war Beirut urban development and the practices of urban planning? 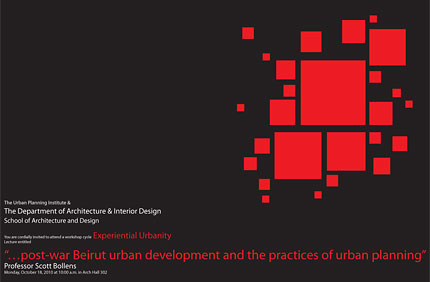