The making and designing of “Room 103” photography book

The Graphic Design Department invites you to a talk by photographer Jeroen Kramer, followed by Q&A session.

What is a photograph worth? A thousand words, as they say in journalism? Or perhaps just 203 words, as Jeroen Kramer discovers one day in Baghdad. Is a picture worth your happiness? Your self-respect? Your name? Your life? Starkly honest and coldly beautiful, “Room 103” is an unblinking study not only of life and death in the strife-torn Middle East but also of Kramer’s inner struggle to come to terms with the human failings, aesthetic limitations and brutal insights of his chosen path. Jeroen Kramer talks about the making and designing of the book.

Jeroen Kramer was born in the Netherlands in 1967 and grew up in Amsterdam. He moved to France at the age of 19 and studied French literature and attended classes at the art faculty. In 2000 he started working in the Middle East as a documentary photographer. At first based in Syria, he has since moved to Lebanon.

Kramer’s documentary work has appeared in many newspapers and magazines, The New York Times and Vanity Fair amongst others covering subjects in the Middle East, Africa, Afghanistan, Burma and the Philippines.

His images have featured in a number of exhibitions, including Noorderlicht’s Nazar and Act of Faith, FotoFest USA’s 2005 exhibition, the exhibit La Vita Nuda at Milan’s 2008 Triennale. In 2009 a retrospective of his documentary work came out in the book titled "Room 103." The work was exhibited at the New York photo festival in 2010 where it won an award. The book was also awarded in the Netherlands by the arts foundation. 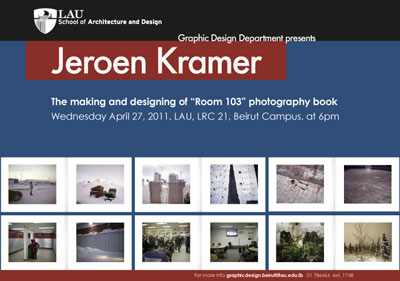