The Institute of Islamic Art and Architecture is organizing a lecture by Alberto Campo Baeza, a well-known Spanish architect.

Alberto Campo Baeza is a Spanish architect, originally from Valladolid. From his father, who was a surgeon, he inherited the spirit of analysis and from his mother the determination to be an architect. Baeza lives in Madrid, where he studied architecture. His first professor was Alejandro de la Sota. He also studied under Julio Cano Lasso, Rafael Moneo, Aburto and Cabrero. He wrote his doctoral thesis under Javier Carvajal and, became professor through the auspices of Sáenz de Oíza at the Madrid School of Architecture.

Alberto Campo Baeza  taught architecture at the ETH in Zurich, EPFL in Lausanne, University of Pennsylvania, Bauhaus in Weimar, CUA in Washington, Kansas State, as well as in Dublin, Naples, and Copenhagen. Alberto spent two years as a research fellow at Columbia University in New York, in 2003 and 2011. He has given many lectures all over the world, and has received many awards like the Torroja for his Caja Granada building, the Buenos Aires Biennial 2009 Awards to his Nursery for Benetton in Venice and his MA Museum in Granada. In 2012 his Offices in Zamora for the Consejo Consultivo de Castilla y León was nominated for the Mies van der Rohe Award. In 2013 he was awarded the Heinrich Tessenow Gold Medal, as well as the Arnold W. Memorial Prize of the American Academy of Arts and Letters, and the International Award Architecture in Stone in Verona. In 2014 he also received the RIBA International Fellowship award. 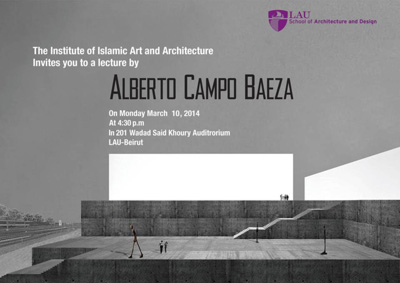