The Department of Design is hosting a talk and session of workshops entitled “Comics: A Specific Language,” to be given by guest speaker Barrack Rima.

Rima is a Lebanese illustrator now living and working in Belgium. He graduated from l’Académie des Beaux-Arts de Bruxelles and l’Institut des Arts de diffusion in Louvain-La-Neuve in Belgium. He studied illustration and comics, as well as film, radio and television. He draws comics and directs movies, and is responsible for the books “Beirut,” “Cairo’s Storyteller,” and the work-in-progress “Nap before noon.” In addition, he draws a weekly comic strip for a Belgian newspaper and Sociologia in Al-Akhbar and serves as editor and contributor to Samandal magazine.

The workshops will be held as follows: 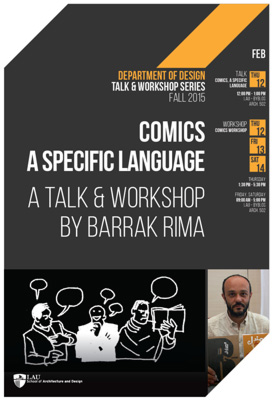