The Department of Architecture & Interior Design is hosting a lecture entitled “Context and Modernity,” to be presented by Saad El Kabbaj and Driss Kettani.

The lecture will be taking place on Monday, April 20th from 6-8 PM, in the Chagoury Health Sciences Center Hall at LAU Byblos.

It will also be taking place on Tuesday, April 21st from 5-7 PM, in Wadad Khoury Student Center WKSC 201 at LAU Beirut.

All are welcome to attend. 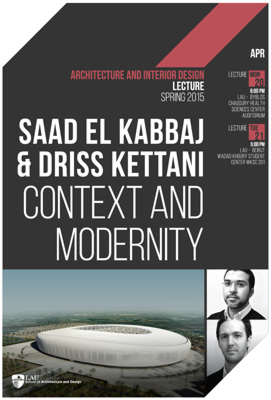