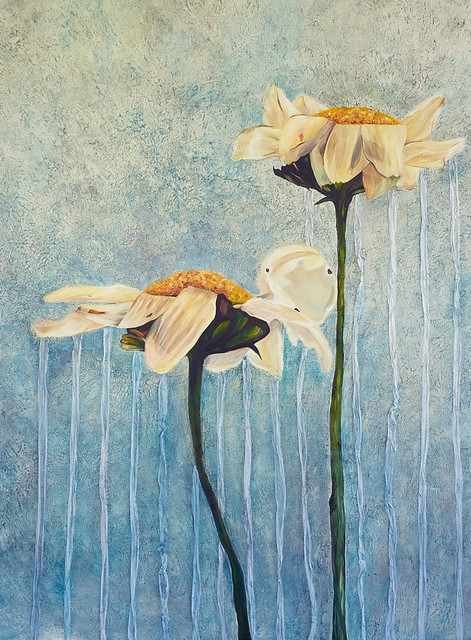 Click on any photo above to view the full photo exhibition

A diversity of styles and media intermingled at the 2018 Fine Arts Faculty Biennale, showcasing work by the faculty of the Department of Art and Design — each with a different angle on present art and politics.

“We have a fantastic faculty which brings so many contemporary ideas and perspectives to the table,” said Randa Abdel Baki, the department chair. “We got really excited [seeing each other’s work]. It brought a real positive energy to the place.”

Associate Professor Hanibal Srouji agreed, saying that “the works remind us of the healthy diversity of production and visual research undertaken by our faculty and illustrate the vibrant atmosphere at the LAU.”

Some pieces tackled purely artistic questions of form and medium. Srouji submitted a canvas disk scrawled with fire, carbon, graphite and acrylic. The colors, while all intense, differ vastly in their depth and texture.

The attempt was to juxtapose different settings and points of view while maintaining the continuum of the piece; to create “an ideal space” which captures the transience of nature, the artist said.

Photography has struggled to gain respect as an art form because it is perceived to merely document reality, Kahil explained— whereas representational paintings, for example, modify the form and color of their subjects, lifting them to “artistic” status. Kahil’s piece, however, is a photograph which not only doesn’t look like candid life, but which calls attention to its own unreality.

It shows a woman at an art installation facing away from the camera, as the photographer’s shadow — triple her size — looms over her. Her experience of the installation feels interrupted, her attempt to distance herself from the photography cut-off by the artist’s dominant figure.

The scene could not have existed, then, without the artist’s intervention into it.

Experimentation continued with “Ode to Milton” by Assistant Professor Lee Frederix, who curated the exhibition. Its layering of paint, paper and other media could be read as an exploration of color, with pale blues lying under deep reds and dead paper browns.

Yet it could also be seen as an “ode” to the American artist Robert Rauschenberg, fusing his famous layering method with newspaper clippings which represent Frederix’s experiences in Lebanon.

Other pieces, by contrast, turned squarely to socioeconomic issues. “Lucifer’s Fall from Heaven” — a painting by Rached Bohsali — compares the corruption of Lebanese politicians to a passage from the Bible. In that passage Lucifer, the most beautiful angel, is thrown down to hell for attempting to seize God’s power, becoming the Devil in his arrogance.

Bohsali’s painting uses Lucifer as a metaphor for the politicians who emerge on the back of promises later betrayed for self-aggrandizement, the artist said. It shows Lucifer falling to a hell of bullets, chains and stones, symbols of the socioeconomic violence that continues to pervade Lebanon, two decades after the civil war.

Finally, some pieces fused these concerns about social life and formal experimentation — asking how art can uplift the present-day. Albert Saikaly wanted to create a sense of both ease and discovery with his submission, “Earth and Heaven,” to cut through the modern pressures that his audience might feel, the artist said.

But on second viewing, the reflection of the sky in the sea isn’t symmetrical at all. In fact, it’s been flipped once more, from left to right. One’s eyes move in a cycle around the piece, enjoying new discoveries while still relaxing in a symmetry of color, if not of form.

“The piece is multilayered but it’s simple and fluent,” Saikaly said, producing a recognition of harmony that the viewer can repeatedly renew.

Abdel Baki explained that her own piece, “Transcend” —a painting of two flowers against a blue sky — also aimed to trigger a feeling of positivity without sacrificing sophistication. But to get that, she continued, you have to see the piece up close.

Heavy bumps of paint and strips of paper — glued to the painting — give its surface depth, while silver threads add lightness to the space above the petals. The sheer size of the painting, meanwhile — 110 by 145 cm — makes the strangeness of the flowers even more obvious: the thin stems shouldn’t be able to support the fat bulbs, but they do, and the result doesn’t feel unnatural.

Far from restricting our joy in the painting, the layers make it feel grander, more curious and detailed than life.